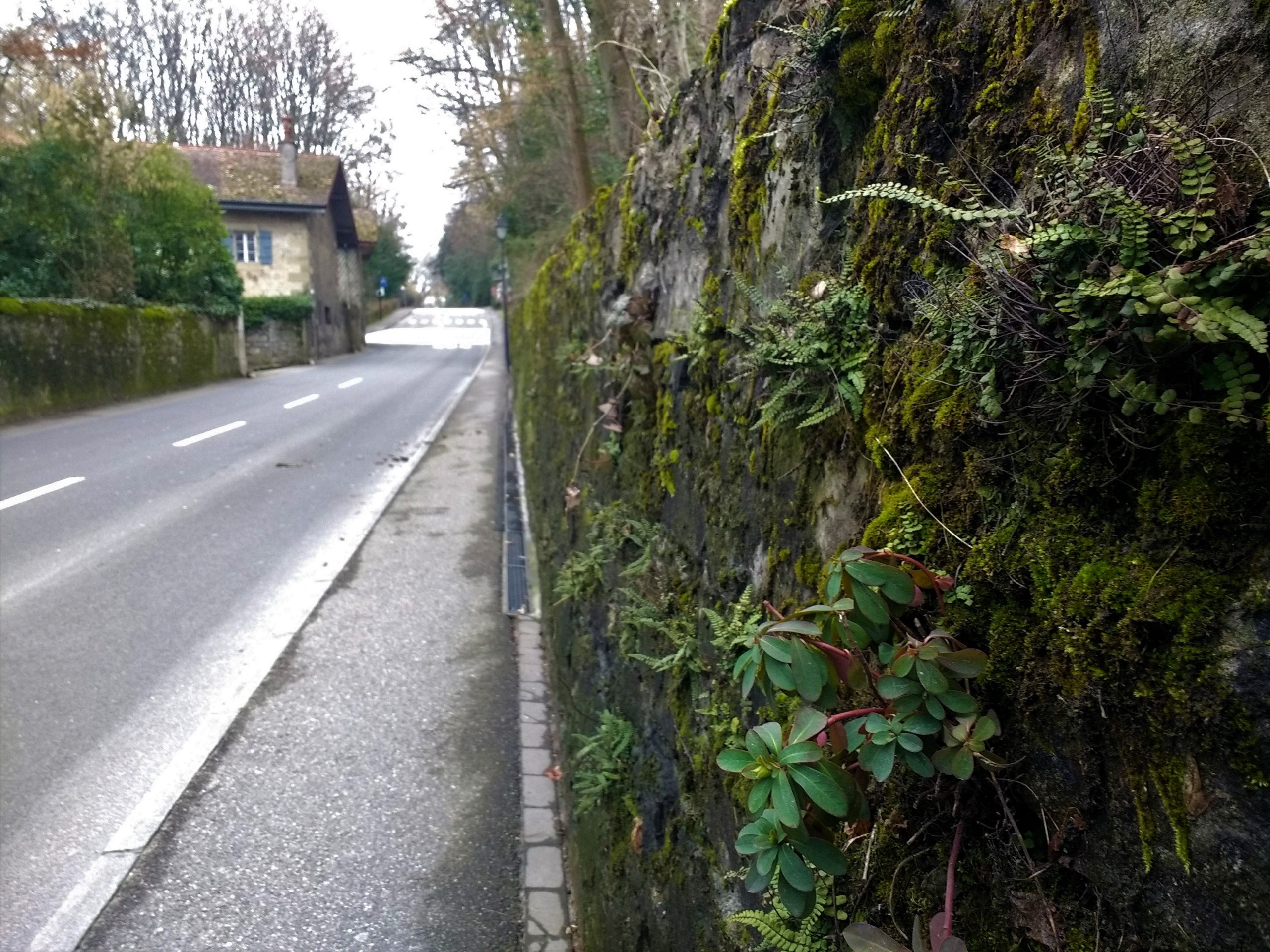 We took Quai Gustave-Ador out of Geneva proper, walking along Lake Leman until the winter tourist crowds subsided. I insisted on walking, despite the cold which had migrated to my lungs. I knew it wouldn’t be the same by bus. If I didn’t walk, it wouldn’t feel to me like I’d really arrived at Villa Diodati, the place where Frankenstein was born.

Why was visiting Villa Diodati so important to me? After all, books can be written anywhere, and while I enjoyed Frankenstein, I probably wouldn’t rank it in my top ten favorite books. Looking around my library, I can’t even say for certain that I still have a copy.

So we climbed, taking the narrow, moss-lined road up to Cologny, past all manner of wealthy homes and embassies, their driveways gated and guarded by expensive surveillance equipment. A few cars passed us, and two joggers in slick work-out gear, but otherwise we were alone, the codeine in my system not quite enough to keep me from coughing fits as we walked.

Already, my expectations were shattering. I hadn’t really been expecting a climb. Both my favorite Byronic horror film, Gothic, and the somewhat more historical Rowing with the Wind depicted Villa Diodati as close to the water. Additionally, as a fellow open-water swimmer, I’d always imagined Byron choosing a closeness to water, ready to rid himself of the shackles of his hated club foot by diving in at every possible moment.

Of course, the summer of 1816 wouldn’t have lent itself to swimming. The 1815 eruption of Mount Tamboro covered Europe in a bleakness known as “the year without a summer,” creating an ideal breeding ground for gothic ghost stories. The weather for our walk was mild, for January, one of those bright grey winter days without a hint of rain. It crossed my mind that perhaps our weather was similar to what Mary Shelley experienced.

Passing through Cologny, we saw few people. It was Sunday, our last day in Switzerland, and a single bakery, tantalizingly open, almost delayed us. We could still see the Jet d’Eau from certain points while walking through town, but it didn’t feel like we were in the city anymore. It must have felt infinitely more remote in 1816.

My fascination with Byron, Percy Shelley, Mary Shelley, and even John Polidori started during a college course called The English Romantics. Lord George Byron seemed the kind of art monster who’s fun to read, but would be hell to encounter in a bar or at a party. I found Percy Shelley best when he embraced brevity, and dreaded reading Frankenstein, because I’d never liked any of the movies.

I should have had more faith in the teenage girl who wrote it. I’d yet to learn of Mary Shelley’s Original Goth Flavor, but the moment I started Frankenstein, my opinion of the novel changed. I saw how Brian Aldiss could argue for its place as the first true science fiction novel. More importantly, I recognized in it one of my favorite tropes, the fallen angel hellbent on destroying his creator.

Here, at last, was a story I could get behind. I was more offended than ever by the brain-dead movie monster Frankenstein. The best villains are full of brains, spite, and insecurities.

Taking a side street slightly downhill, we arrived at Villa Diodati. Although I’d seen pictures online, preparing myself for finding this privately owned property, I still almost missed it. I was suddenly glad we’d come in winter: we’d barely have been able to see the villa from the street with summer foliage.

Although beautiful, Villa Diodati was less grand than I expected. I’d imagined something sprawling, not an ornate cube on a steep hillside. I paced the garden wall, taking dozens of selfies, glad we were the only people anywhere to be seen.

The only clue that this was the famed house where literary giants once vacationed was a sign on what must have once been the carriage house, indicating that Lord Byron once stayed there. From a sign at the nearby Park Cologny I learned the Shelleys had rented a house slightly closer to the lake: another fact the movies twisted for narrative expediency.

Discovering how wrong I’d been was the opposite of disappointment. I’d traveled there to understand an aspect of a story I loved: four unconventionals, stuck in a villa on a stormy summer night, telling ghost stories. The youngest, a teenage girl who’d run away from England with a rock star poet, gets an equally unconventional idea: What if a scientist could harness power previously thought to belong only to God? How would his creation feel? This germ of a story would outlive all the rest of the rebellious group’s infamy, spawning thousands more stories, each audaciously asking “what if?”

Of course the villa matters, and the turbulent weather, and the view from the villa, and the lake below. That’s what I walked to Villa Diodati to learn, and that’s what I discovered:

The scope of it.

A queer writer and artist from the tidal flats of the Salish Sea. Author of Between Death and the Devil: Tarot Poems, So Our Idols are Dead: Empowerment Poems, and Persons of Consequence: A Pacific Northwest Gothic Novel. View more posts